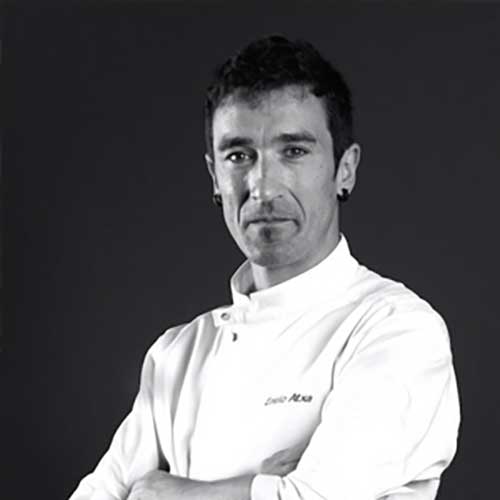 An icon of modern Basque cuisine, Eneko Atxa (Amorebieta, Basque Country, 1977) has made a name for himself in the upper echelons of gastronomy by combining creativity with a sensibility for tradition and the environment. Azurmendi, his flagship restaurant with three Michelin stars, has twice won the Sustainable Restaurant Award from The World’s 50 Best Restaurants list (in 2014 and 2018). Nestled among the picturesque hills surrounding Bilbao, Azurmendi is designed to operate while producing the least amount of waste and pollution possible. It boasts a greenhouse, an orchard and a hundred hectares of surrounding forest that offset its CO2 emissions. This restaurant is more than 90% sustainable: 75% of its ingredients are harvested from its own garden and other local producers.

Atxa has also been involved in community outreach with families and restaurants teaching them how to convert their waste into fertilizer for local farmers. He has also designed healthy meal plans for hospital patients. In addition to Azurmendi, this once-outstanding apprentice of some of the Basque Country’s greatest chefs has opened other restaurants in Bilbao, London and Tokyo.